The Fan Cart is a large fan on a light-weight cart. It offers students the ability to perform kinematics and dynamics experiments with constant acceleration, variable mass, variable thrust, and variable thrust angle.

The fan has three speeds for studying the effect of variable thrust. Two mass bars let you change the total mass of the cart to observe how mass affects acceleration. The fan turns on a protractor base, allowing the thrust to be directed at a known angle from the direction of travel. In this way students can investigate vector component applications.

A sail is included to perform the fan-on-a-sailboat experiment. The sail can be mounted in two positions to study the subtle effects of diverted airflow.

Although the cart can be used for qualitative experiments alone, most often it is used with a Motion Detector on a Dynamics Track. 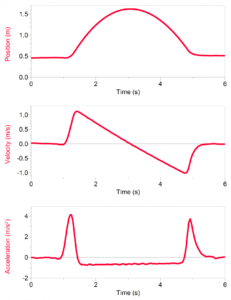 Constant acceleration with Fan Cart. Note how clean the acceleration graph is. The cart was launched and caught by hand. Effect of thrust angle on acceleration. We expect that the component of the force parallel to motion will be proportional to acceleration.

Find ready-to-use experiments that help you integrate data collection technology into your curriculum.

Get inspired with these helpful ideas!

Vernier products are designed specifically for education and held to high standards.

We offer several ways to place your order with us. Explore your options.

Learn More About Us

Our products compliment your teaching and help your students engage with key STEM concepts.